The musings of a follower of the Messiah.
Leave a comment

Nothing New Under the Sun: Racism in America (Again) 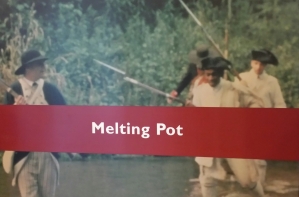 The Title of the Valley Forge Display Covering Minorities. (Yes, we found only one display.)

My friend, and fellow MennoNerd, Drew Hart shared a link on Twitter this morning to a piece he wrote in August 2013. The piece speaks to the relationship of 400 years of discrimination from the origins of black slavery through the modern day. While the most recent incident mentioned in the piece is the Trayvon Martin case, his thoughts are just as valid as we look again at the response to the comment attributed to Donald Sterling, owner of the Los Angeles Clippers. Despite many previous rumors about his bigotry, and more than one lawsuit accusing him directly, many seemed shocked that he might say something like this. How can we still be shocked that there are racist white men in America? Just last week, a right-wing cattle rancher wondered if black’s might not be better off as slaves.

The fact that we continue to act shocked and appalled, and to pretend that white racism is an isolated and rare occurrence, it strains credibility. Centuries of privilege gained on the backs of blacks do not quickly fade from the social systems. Just about a week ago I visited Valley Forge with my family. I asked my children to keep their eyes open for any Native, black, or other minority in any of the displays. It was hard work. Other than one display focused on the “melting pot” which mentioned Native Americans, slaves, Jews, women, and Catholics, there wasn’t much. Everything else showed a wide swath of white/European male faces. The video presented about the encampment barely mentioned some Philadelphia women who supported the army, but no mention of the “melting pot” of diversity that we often like to imagine. Our version of US history is essentially the white version. The sacrifices, usually involuntarily, of minorities is completely absent.

Drew does all of us a service, if we value truth, by reminding us of the impact of this history:

Like clockwork our country cycles through event after event that sparks outrage over issues of race and racism in America. The responses to events like these are predictable, as many fall into their default positions, because people’s perceptions of what took place are equally shaped by race as much as the event itself that triggered the conversation. A slight majority of white Americans will deny and dismiss the outcry and experience of black Americans, claiming that it is emotionalism and an inability to deal with the facts. From their vantage point, only they are seeing things objectively. Their experience tells them that America is generally speaking a good, fair, and equal country. The continual outcry of black Americans, therefore, is a result of media manipulation and race card playing for sympathy. In the end, these White Americans apparently know and understand black experience better than black people themselves know it. Despite the fact that those who deny systemic racism most, are actually more likely to have less racially diverse networks than white Americans who also recognize the racial inequalities in America similar to African Americans (check out Divided by Faith).

And there lies the problem. White intuition and experience (limited by homogeneous networks) is signifying one thing while black experience is claiming an alternative reality. What are people who participate in dominant society to do when their intuition and experience contradict the experiences of oppressed people? It is on that subject that we must gain some historical insights from before we can offer a constructive path forward.

Drew then tracks through some of this embarrassing history of  race relations in the US. He then concludes with a message to those of us who claim the name of Christ:

This call for counterintuitive solidarity and trusting the historically marginalized and oppressed perception above one’s own is not easy. But I believe that Jesus’ own emptying of himself and taking on slave humanity models for us The Way forward. Jesus’ own solidarity performance is a call to discipleship and imitation as a way of being in the world. It is the cure for privileged blinders that leaves people’s own vision impaired and unreliable. The Spirit is pulling all of us to see things “from below” because that is where God has chosen to move, work, and transform the world (1 Cor. 1:18-31).

I encourage you to read all of Drew’s piece, as it can help those of us who are white to reset our own personal blinders to the effects of so many years of learned privilege and practiced ignorance of our position. For minorities, I hesitate to suggest what you might gain, since I have not walked in our shoes, but would suggest that understanding why whites often miss what should be so obvious to us is well explained in the piece. Drew has done and evenhanded job of fairly representing what you will too often have to deal with in dominant white culture.