The musings of a follower of the Messiah.
2 Comments 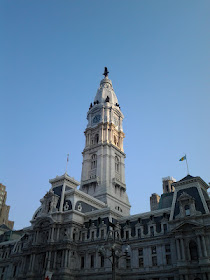 An Interesting View for a Picnic

Yesterday I posted about an attempt from The Simple Way to speak to the injustice they see in Philadelphia Mayor Michael Nutter’s proposed ordinance basically abolishing feeding the homeless unless you have permits and do it at approved places. My friend Rob Martin decided to participate in this gathering, and wrote about the experience over at his blog (Abnormal Anabaptist). Here is a taste:

So, despite all my panic, it was a very subdued, low-key event of a bunch of folks just spending time together.  What did we accomplish?  Well, in the eyes of the world, worried about laws, regulations, and government agencies, not a whole lot.  We didn’t change the law.  We didn’t change any politicians minds.  To that extent, we failed.

To the man who stocked up on sandwiches for the week, it wasn’t a failure.

To the man who stood there while we loved on him with a sandwich, a cupcake, an apple, and a bottle of water, it wasn’t a failure.

To the young man who, strange though he was, found a bunch of folks that just accepted him no matter how outrageous he acted, it wasn’t a failure.

This was the third way.  This was the way of Christ made flesh.  This proved that it was possible to act counter to justice in a way that did not sacrifice grace, mercy, compassion, and love, even for those with whom we disagree.  Instead of attacking the counsel, we fellow-shipped.  Instead of shouting angrily, we fed quietly.  Instead of chanting slogans, we laughed together.  We demonstrated to everyone who saw us that there was something different, something other going on.

This is what faith can do.  It can change the world.  It’s subversive.  It gets under the skin and transforms people without them even knowing it.

If we remember that, if we take that every where we go, imagine the possibilities.  Imagine what we can accomplish when we decide that, when we’re acting for Jesus, we are acting with him.

And it’s uncomfortable.  When we decide to spend time with Jesus, we’re going to be taken in some very strange places and directions, places that we would never decide on our own to do.  I hate meeting new people, I despise walking into a strange situation where I know no-one.  And yet, that is precisely what God required of me so I could spend time with Jesus.

You see, this is a radical faith we have.  Following Jesus is not safe, it’s not comfortable, it will take you out of your normal life and you will never be able to go back to it the same.  For me, I’m no longer satisfied with living a “normal” life.  I’ve encountered God and the experience has changed me forever.  For those Christians who only know a faith of “agreement” and don’t know that radical, gut-wrenching, whole-body, throw caution to the wind kind of faith, I feel sad.  I know many who don’t know that.  I know many who are satisfied with their life as it is.

“I don’t think I would change anything of my life, even if I wasn’t a Christian”.

Yes, I’ve heard that from some.  And it saddens me.  It tells me that, as much as they may “believe” something, they haven’t yet experienced that transformation that comes from diving in head-first into the terror of a faith lived on the edge.  And it is that experience that I find in Hebrews 11.

If you haven’t experienced that yet, I hope you will stop, think, and start to look around with a new set of radical eyes, seeking for where God is moving.  And if you have experienced it, well… you know EXACTLY what I’m feeling right now.

← Picking on the Homeless: Update
Can the Social Gospel Be a Form of Idolatry? →

2 comments on “Update from Rob Martin”