The musings of a follower of the Messiah.
Leave a comment

Posted by No Longer Normal on 31 January 2012 in Family, Food 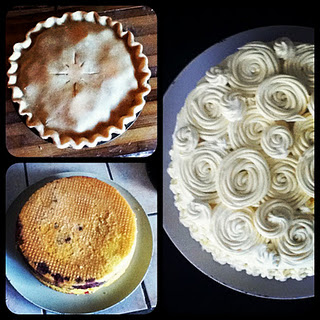 What would happen if you put a baked pie in the middle of a cake? Someone, somewhere decided to try this. A former student (Chris Tierney) posted this to Google+ via Slacktivist on Patheos (where it is called a Laodicean dessert, bonus points if you figure out why). I followed the link there to the source (Jamie the Very Worst Missionary) I quote here, which is as original a source as I could track down.

A “picaken” is a whole entire pie baked into a whole entire cake. And you can’t just go and make a Picaken and then not talk about it on your blog. A Picaken is more than food… it’s an adventure.
It all started when I was poking around on Pinterest one night and I stumbled upon a Picaken. I thought it was ridiculous and honestly kinda gross looking, so I showed my husband, fully expecting him to agree that, yes, it was absurd and “why would anyone ever do that?!”.
He took one look at it and said, “THAT is what I want, no, demand for my birthday cake!”
And since I’m not the type to let a demand for dessert go unanswered, Picaken happened.
We agreed that a lemon cake with a blackberry pie sounded pretty darn delicious. So using every bit of culinary prowess I could muster, I set about my work, determined to complete the monstrous task of impregnating a cake with a pie.

Haven’t yet decided if I’ll ask Joy to make this for me at some point, but I was intrigued to read about this, and have begun to wonder what combinations might work for my tastes. The picture above is from Jamie’s post about her culinary escapades in crafting this dessert. The picture below gives more of a sense of the cross section. 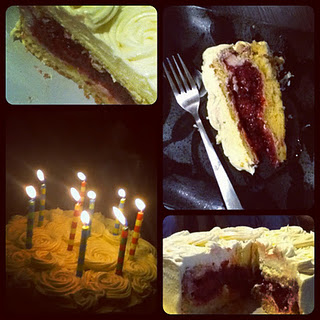 ← A Fun Piano Guys Video
A Matter of Perspective →